ANOTHER CIRRUS SR22 GOES DOWN DUE TO LOSS OF POWER

A Cirrus SR22 piloted by an experienced and well-respected pilot was on approach to Wings Field, Blue Bell Pennsylvania when it suddenly lost power requiring an emergency landing on a golf course.

Both occupants survived though injured. This crash is important because the pilot survived. He will be able to explain his power loss which prevented him from achieving enough power to even maintain level flight. Plenty of fuel, no expense spared for maintenance but yet another two occupants were nearly killed when the powerplant failed.

There have been more than 100 losses of power in this model Cirrus. Many have been killed or injured and while the aircraft has a ballistic recovery system, a parachute that can be used to lower the aircraft to the ground safely, many pilots either cannot or are reluctant to pull that handle because it works only about 80% of the time and destroys the airplane.

The solution for Cirrus is to do away with this unreliable powerplant and develop with partners or buy an off-the-shelf turboprop powerplant which has immense reliability compared to the turbo-normalized piston powerplant it used in this model. Later models used an even more unreliable turbo-charged engine. A turboprop engine is a jet engine attached to a propeller and does not suffer the unreliability issues that piston engines do.

That switch would increase the cost of the aircraft which is now expensive at a million dollars each but each accident costs Cirrus millions to defend and compensate so the cost benefit should be obvious.

The impact on the victims and their families is unspeakable and morally there is no choice but to improve the Cirrus and its safety record.

The Wolk Law Firm has litigated many Cirrus loss of power accidents and while the NTSB will no doubt find nothing to explain this power loss, we recommend looking carefully at the turbo, its bearing and controller, the fuel pump and its controller and whether the exhaust system was functioning as it should just prior to the crash. Absent a catastrophic failure of the crankshaft, a broken rod or a hole burnt into a piston, it is likely the more obtuse causes that explain this sudden loss of power.

Cirrus is now explaining away the accident by claiming that the pilot ran out of gas. Well he didn’t. In fact, he stopped in South Carolina for fuel and was only 3 hours into the flight when the engine lost power, it never quit, it just couldn’t maintain flight. That’s how airplane manufacturers work. After spending the better part of a million dollars with them, they become your adversary when the defects they built in cause a crash.

Kudos to the pilot who successfully made an off-airport landing.

A Bell 407 piloted by an experienced  charter helicopter pilot crashed at the Essex County New Jersey Airport injuring the pilot.

The craft was seen rotating before the crash and pictures taken at the scene reveal a severed tail rotor driveshaft and fractured rotor blades. The tail rotor in that model counteracts the torque from the rotor blades and without it, the helicopter will rotate and it is a miracle that a safe landing was achieved.

The main rotor blades contacted the tail boom of the helicopter and severed it but that only can happen if a mechanical failure induces the main rotor blades to flap excessively. That happens due to delamination of the composite rotor blades resulting in excessive flapping, a stuck anti-torque-pedal limiter or sudden engine overspeed. All three have resulted in Model 407 accidents. 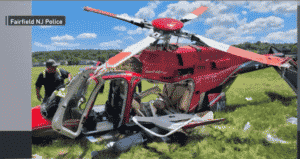 The Wolk Law Firm is litigating the deaths of two Virginia State Troopers killed when their Model 407 did precisely the same thing as in this latest accident, but it also fell into trees and burned.

Bell is defending the Virginia State Police case claiming that LTE or Loss of Tail Rotor Effectiveness and Vortex Ring State caused the Virginia accident, all of it totally made up. The problem is that both are defects in the design of the helicopter but neither caused that accident or this one.

In the Virginia crash, witnesses saw the helicopter rotating before it settled into the trees and it too had a severed tail rotor driveshaft and fractured main rotor blades.

The Model 407 has a bad accident history with one Band-Aid after another applied by Bell.

Perhaps this pilot who mercifully lived will be able to tell his story because in Virginia Bell relies on the fact that dead men tell no tales. They can’t!