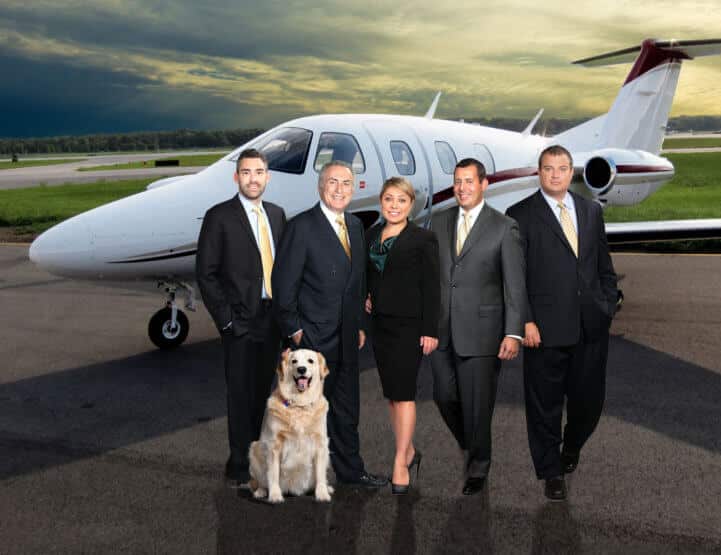 A Hawker 800 executive jet aircraft crashed at a small airport in Minnesota, south of the Twin Cities on July 31, 2008. Witnesses describe a touchdown on a wet runway, a roll-out, then the application of power and a crash just beyond the end of the runway. All aboard were killed, either from impact or the ensuing fire.

The crew had successfully diverted around heavy weather and was landing in an area of moderate rain showers. Just before the crash, a wind shear alert was given (a rapid change in wind direction and velocity). Normally, a flight crew will add as much as 10 knots to the landing reference speed in the event of wind shear. The aircraft made it to the airport and the runway, and presumably the lift dump system was deployed, which should have allowed the aircraft to stop in 4,000 feet on a dry runway, according to the flight manual. It is typical for jet aircraft to touch down in the first 1,000 feet but, due to the wind shear, the first 1,500 feet may have been used. Therefore, except for the wet runway, 5,500 feet should have been sufficient for landing to a full stop, leaving about 750 to 1,000 feet remaining, if all went as expected. However, because of reported tail winds and standing water on the runway, it was questionable whether stopping in the available distance was possible. Hydroplaning, further increasing stopping distance, was also likely.

For all, or some of these reasons, the landing didn’t go as expected. The crew elected to “go-around,” meaning they would have had to stow the left dump spoilers and flaps, and trim and apply takeoff power. The engines, likely idle by this time, would have had to spool up and the aircraft would have needed to accelerate again to take-off speed. The time to make the decision to go-around, stow the lift dump and achieve take-off thrust could have taken 10 to 15 seconds and used up another 1,000 to 1,500 feet of runway. That left precious little, or no, runway for the aircraft to accelerate to lift-off speed.

The aircraft did not leave the ground. Wheel tracks show that it left the pavement, traveled in the runway safety area–still on the ground–struck an antenna array, and then fell into a culvert where it burned. While there is no doubt the crew tried to save the aircraft, the decision to go-around on that size runway may have doomed the flight.

Investigators will review the cockpit voice recorder and, if equipped, the flight data recorder for clues and will look at the wreckage to determine the aircraft configuration at time of impact.

This information should confirm that unless there was a mechanical malfunction, this accident was preventable, like so many others of a similar type.

Even the best flight crew can find itself without options under circumstances like these. The tragedy of this accident reminds us all that aviation safety means no accident, whether it’s a mechanical malfunction, the combination of foul weather and a short runway, a faulty decision to go-around based upon inadequate aircraft performance information or just a mistake.

No conclusions can or should be drawn about this accident as the investigation has just begun, but these are some thoughts that bear consideration regardless of the ultimate findings.