CESSNA 340A CRASHES UPON ARRIVAL AT MONTGOMERY-GIBBS EXECUTIVE AIRPORT SAN DIEGO-CHALLENGING ATC INSTRUCTIONS, ANOTHER POSSIBLE ENGINE FAILURE AND ANOTHER CRASH BECAUSE OF LAX FAA CERTIFICATION

The Cessna 340A was Cessna’s first attempt at a cabin-class twin. It was derived from the earlier successful non-cabin class Cessna 310. The critical difference was that the 340A was much bigger and had the same turbocharged Continental engines.

The Wolk Law Firm has litigated against Continental Motors for years from accidents related to catastrophic failure of these engines. Continental, now owned by the Chinese Communist Government, always denies responsibility for these engine failures but the history of them cannot be denied.

I remember fifty years ago at Wing’s Field every Continental powered aircraft on the field including mine had a major problem. Cracked crankcases, blown cylinders, failed rocker arm bosses, broken rings, failed crankshafts, burnt valves, swallowed valves, seized bearings and oil starvation are just a few of the many problems, some of which resulted in accidents, but all of which required engine replacement or major repairs.

The Cessna 340A is a nice airplane, large inside, pressurized for comfort, pretty looking on the ramp. But it has a problem that is nearly always deadly. If one of these problem engines fails, the effects on the airplane make it a handful to fly and frequently, all too frequently, there is a crash killing all aboard.

The second problem is called VMC. VMC is the speed below which a failure of the critical engine with the propeller windmilling will cause the aircraft to lose directional control and roll right over on its back suddenly, as in a second or two. Once the airplane starts to roll, it increases its roll rate until it’s impossible to stop.

Pilots are trained to recognize and deal with loss of an engine. In theory, when the engine fails you Identify, Verify, and then Feather the propeller on the failed engine. You accelerate to VMC and roll 3-5 degrees into the operating engine. Unfortunately, by that time you are already dead.

When these airplanes were certified, the manufacturer determined the VMC speed and the FAA bought into it. In truth, only a test pilot who knows he is going to simulate a failed engine can maintain aircraft control at VMC.

For the rest of us, engine failure is a sudden emergency that has pilots swimming in glue until it’s too late. The Cessna 340A doesn’t have auto-feather that helps other aircraft somewhat by moving the dead engine’s propeller blades to a more streamlined position. When an engine fails in a twin, the airplane loses more than fifty percent of its power due to drag and the fact it is now flying sideways. The Cessna 340A is no exception.

The pilot, a cardiologist who had flown into this airport frequently in this airplane, was on an ILS Approach to Runway 28R, an instrument approach I have flown many times. He was working SOCAL Approach and as usual was getting very crisp, rapid instructions to descend and intercept the final approach course. The last instruction appears to be to descend to 2800 feet and fly heading 250 degrees to intercept the localizer. Typical for SOCAL approach, the pilot didn’t get an approach clearance until later because of his altitude, position and heading for the localizer upon which he was not yet established. The pilot actually asked for the clearance as I have had to do many times as well.

As is not infrequent, the rapid descent required, turn to a new heading and high airspeed causes the airplane to blow right through the localizer. The pilot was cautioned that he was not flying the localizer course to the runway. He also got a low altitude alert from the Controller making the pilot’s workload even higher.

When I listened to the ATC communications, I heard the Controller give the pilot a descent to 2800 feet. That is 1000 feet lower than the normal approach clearance of 3800 feet until established on the approach and no doubt contributed to the pilot’s overload and confusion. I have flown that very approach many times and I have never been given a descent to 2800 feet at that point.

Once the approach was mishandled, the pilot was given a climb to 5000 feet for new vectors for the approach and he acknowledged the new clearance after which control was lost and the crash occurred.

While it would appear that pilot overload may have contributed to this accident, a missed approach would have been a piece of cake if everything was working alright. The fact that the airplane didn’t climb and control was lost may mean that at a very inopportune time one of the engines lost power and a VMC roll ensued. The pilot had adequate experience and ratings for this flight and was familiar with the terrain and procedures to be flown. Something else killed him and an innocent UPS driver on the ground.

The Wolk Law Firm is saddened by yet another Cessna cabin class twin crash and another possible engine failure that may have contributed to it.  I must also say that the vectors and altitudes given by ATC on both instrument approaches to Runway 28 Right at KMYF are often challenging.

May the memories of those killed be a blessing.

Air Traffic Control audio can be downloaded from LiveATC.net: 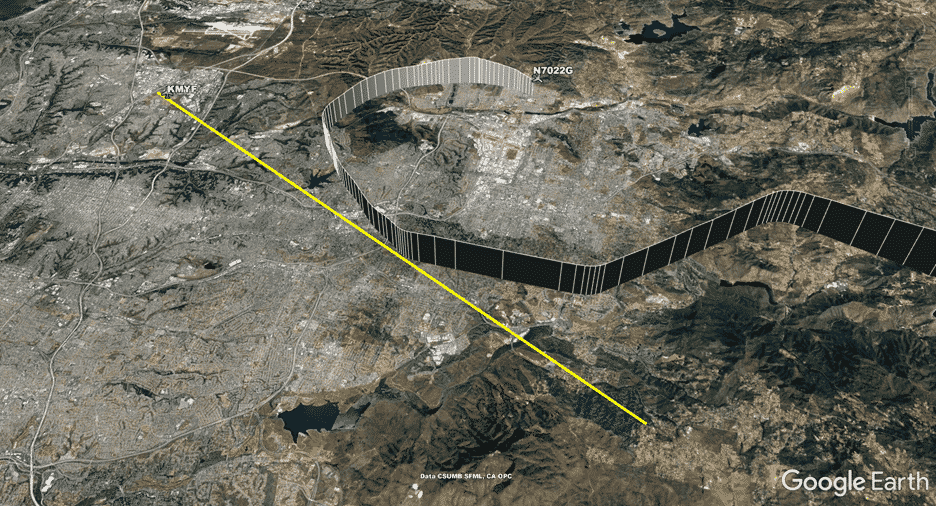